Outstanding investigative journalism and personal accounts from people who knew him show that Brett Kavanaugh lied again and again at his Senate confirmation hearing. How can a serial liar possibly be confirmed into the role of a Supreme Court justice?

Kavanaugh lied repeatedly about Dr. Christine Blasey Ford’s testimony that she was sexually assaulted by him at age 15.

Kavanaugh repeatedly lied that her account had been “refuted” by witnesses.

He lied about his behavior in high school and college.

He lied many times about policies he worked on during the presidency of George W. Bush.

“Kavanaugh is such a brazen liar that many of his false claims have been entirely refuted by reporting,” Media Matters for America says in this comprehensive list of his lies under oath before the United States Senate.

Here are some of Kavanaugh’s lies:

Kavanaugh repeatedly claimed Ford’s accusation has been “refuted” by others who she said attended the party — even though the other attendees have said no such thing. Kavanaugh seized on the word “refuted” when responding to Ford’s report, claiming in five instancesthat the three people who Ford says were at the party when Kavanaugh sexually assaulted her had “refuted” her account. That’s an obvious misrepresentation of what those people have said. They have actually all said that they don’t recall the party in question — a major difference from saying something didn’t happen. And Ford’s friend Leland Keyser has said that although she doesn’t remember the party in question, she believes Ford is telling the truth.

Kavanaugh attempted to fabricate an alibi by suggesting he did not drink on weekdays and was out of town almost every weekend night of the summer of 1982. Kavanaugh claimed that the incident Ford described “presumably happened on a weekend” and suggested that he and his friends didn’t drink during the week because of their jobs while adding he was “out of town almost every weekend night before football training camp started in late August.” In doing so, Kavanaugh attempted to falsely imply that he did not attend the type of get-together that Ford described. Kavanaugh’s lie is readily apparent in the calendars he provided the committee and a contradictory statement he made acknowledging “the calendars show a few weekday gatherings at friends’ houses after a workout or just to meet up and have some beers.” In particular, great attention has focused on his July 1 calendar entry — a Thursday — that showed he was having “[brew]skis” with some of the people Ford said were at the party.

Kavanaugh said he had no connection to Yale University prior to attending undergrad and law school there, but he was a legacy admittee. While denying that he was a heavy drinker in college who drank to the point of blacking out, Kavanagh said, “I got into Yale Law School — that’s the number one law school in the country. I had no connections there; I got in there by busting my tail at college.” In fact, Kavanaugh’s grandfather Everett Edward Kavanaugh attended Yale, making Kavanaugh a legacy student.

Kavanaugh denied every blacking out from drinking and downplayed his alcohol consumption as a young man, but numerous Yale classmates say he was a belligerent drunk. Kavanaugh became angered under questioning from Sen. Amy Klobuchar (D-MN) after she asked him if he ever blacked out from excessive drinking. In response, Kavanaugh pressed Klobuchar if she had ever blacked out and claimed that he doesn’t have a drinking problem. The New York Times reported that “nearly a dozen” of Kavanaugh’s classmates “said they recalled his indulging in heavy drinking, with some characterizing it as outside the norms of college life.” His freshman roommate James Roche said Kavanaugh was “frequently unusually drunk” and would become “belligerent and mean,” while classmate Charles “Chad” Ludington said Kavanaugh was “a frequent drinker, and a heavy drinker.” Classmate Elizabeth Swisher calledKavanaugh’s claim he never blacked out “a lie” based on her observation of his behavior at the time. Classmate Lynne Brookes told CNN that she and her former classmates were texting each other during the hearing that Kavanaugh was lying about his college drinking habits.

A fitting legacy for President Trump, is there a rule of law in the US?

Last week, the allegation that Brett Kavanaugh drunkenly assaulted a girl at a party in high school threatened to derail Kavanaugh’s Supreme Court nomination. That was bad, yet Republicans (namely Mitch McConnel pushed on)

Now, as Kavanaugh’s accuser prepares to testify before the Senate Judiciary Committee on Thursday, two more women have come forward, one to say that Kavanaugh thrust his penis in her face at a party at Yale in the 1980s, the other alleging some very serious and disgusting misconduct by Kavanaugh and Mark Judge as high schoolers:

On Wednesday lawyer Michael Avenatti released the sworn deposition of Julie Swetnick, who details a string of serious allegations against Kavanaugh and friend Mark Judge at house parties in 1980 and 1981:

Below is my correspondence to Mr. Davis of moments ago, together with a sworn declaration from my client. We demand an immediate FBI investigation into the allegations. Under no circumstances should Brett Kavanaugh be confirmed absent a full and complete investigation. pic.twitter.com/QHbHBbbfbE

Here’s the full deposition, via Avenatti: 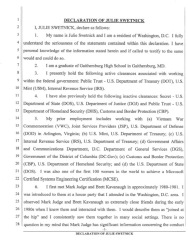 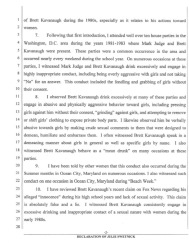 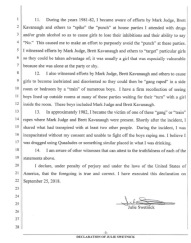 I have no idea if Julie Swetnick is telling the truth. I can say this: submitting a sworn affidavit carries with it criminal liability if she perjured herself.

Also, as a clearance holder, giving perjured statements would be a career-ender. Take that for what it's worth.

Swetnick’s allegations sure do sound a lot like the recollections of Mark Judge’s college girlfriend:

Rasor recalled that Judge had told her ashamedly of an incident that involved him and other boys taking turns having sex with a drunk woman. Rasor said that Judge seemed to regard it as fully consensual. She said that Judge did not name others involved in the incident, and she has no knowledge that Kavanaugh participated. But Rasor was disturbed by the story and noted that it undercut Judge’s protestations about the sexual innocence of Georgetown Prep. (Barbara Van Gelder, an attorney for Judge, said that he “categorically denies” the account related by Rasor. Van Gelder said that Judge had no further comment.)

Christine Blasey Ford, a professor of psychology at Palo Alto University, was the first woman to accuse Kavanaugh of assault. She sent a confidential letter to Senator Dianne Feinstein (D-CA) in early July. She told her story publicly in the Washington Post on September 16.

Ford says that sometime in the early 1980s Kavanaugh assaulted her at a house party in Montgomery County, Maryland while his friend Mark Judge looked on:

While his friend watched, she said, Kavanaugh pinned her to a bed on her back and groped her over her clothes, grinding his body against hers and clumsily attempting to pull off her one-piece bathing suit and the clothing she wore over it. When she tried to scream, she said, he put his hand over her mouth.

“I thought he might inadvertently kill me,” said Ford, now a 51-year-old research psychologist in northern California. “He was trying to attack me and remove my clothing.”

Ford said she was able to escape when Kavanaugh’s friend and classmate at Georgetown Preparatory School, Mark Judge, jumped on top of them, sending all three tumbling. She said she ran from the room, briefly locked herself in a bathroom and then fled the house.

On Sunday, the New Yorker published an account of sexual misconduct from a second woman, Deborah Ramirez, who was a classmate of Kavanaugh’s at Yale.

Ramirez said that, when both she and Kavanaugh were freshmen at Yale, she was invited by a friend on the women’s soccer team to a dorm-room party. She recalled that the party took place in a suite at Lawrance Hall, in the part of Yale known as Old Campus, and that a small group of students decided to play a drinking game together. “We were sitting in a circle,” she said. “People would pick who drank.” Ramirez was chosen repeatedly, she said, and quickly became inebriated. At one point, she said, a male student pointed a gag plastic penis in her direction. Later, she said, she was on the floor, foggy and slurring her words, as that male student and another stood nearby…

A third male student then exposed himself to her. “I remember a penis being in front of my face,” she said. “I knew that’s not what I wanted, even in that state of mind.” She recalled remarking, “That’s not a real penis,” and the other students laughing at her confusion and taunting her, one encouraging her to “kiss it.” She said that she pushed the person away, touching it in the process… She remembers Kavanaugh standing to her right and laughing, pulling up his pants. “Brett was laughing,” she said. “I can still see his face, and his hips coming forward, like when you pull up your pants.” She recalled another male student shouting about the incident. “Somebody yelled down the hall, ‘Brett Kavanaugh just put his penis in Debbie’s face,'” she said. “It was his full name. I don’t think it was just ‘Brett.’ And I remember hearing and being mortified that this was out there.”

In a statement to the New Yorker, Kavanaugh said, “This alleged event from 35 years ago did not happen… This is a smear, plain and simple.” Two of the male classmates whom Ramirez accuses of egging Kavanaugh on at the party said they didn’t remember such an incident occurring. Six other classmates who describe themselves as “the people closest to Brett Kavanaugh during his first year at Yale” also released a statement denying the incident, writing, “We can say with confidence that if the incident Debbie alleges ever occurred, we would have seen or heard about it — and we did not.”

Two of the classmates who signed the statement supporting Kavanaugh’s account soon after asked the New Yorker to remove their names. 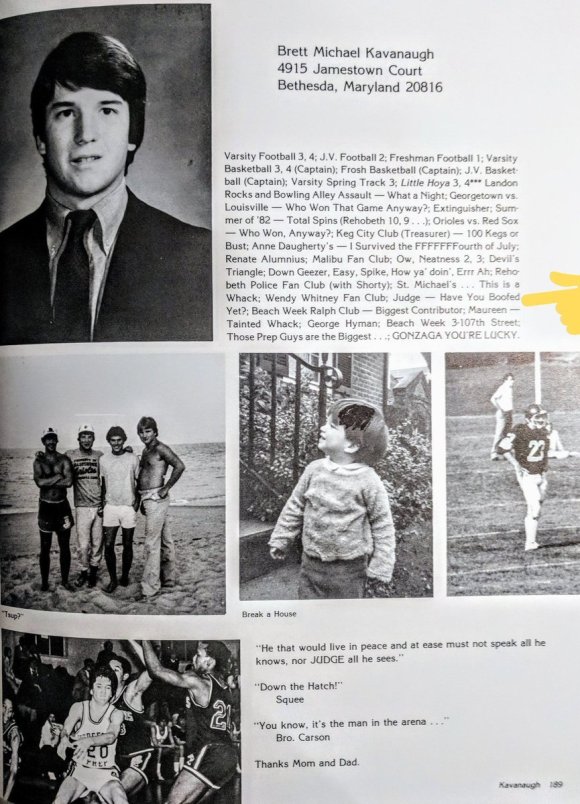 The accusations come from high school, so what was Kavanaugh up to at that time. The Georgetown Prep ‘83 Yearbook offers some clues. Let’s focus on the Senior Class entries of Mark Judge and Brett Kavanaugh (whose entry is pictured above). For Mark Judge’s entry, go to this twitter feed and scroll down about 2/3 of the way.

When you do, you’ll find the following:

Judge— Have You Boofed Yet?

Bart, have you boofed yet?

Here’s how “Bart O’Kavanaugh” was described in that memoir:

In “Wasted,” Judge also describes an exchange with a young woman at a party when talk arose of a friend who puked in a car:
“Do you know Bart O’Kavanaugh?”
“Yeah. He’s around here somewhere.”
“I heard he puked in someone’s car the other night.”
“Yeah. He passed out on his way back from a party.”

Yup, Brett Kavanaugh is a degenerate drunk who gang rapes people. Honestly, pretty much par the course for Republicans these days. Now, watch this and laugh. Or cry:

Here’s a montage of Trump’s hateful, racist remarks through out the years.

“Maybe hate is what we need if we’re going to get something done.”

“I have absolutely no compassion.”

“If I were starting off today, I’d love to be a well educated black because I believe they really do have an actual advantage.”

That’s a wrap up of just the first part of the video. A potent reminder of what currently sits in the White House.